Review: Aurora - The Gods We Can Touch 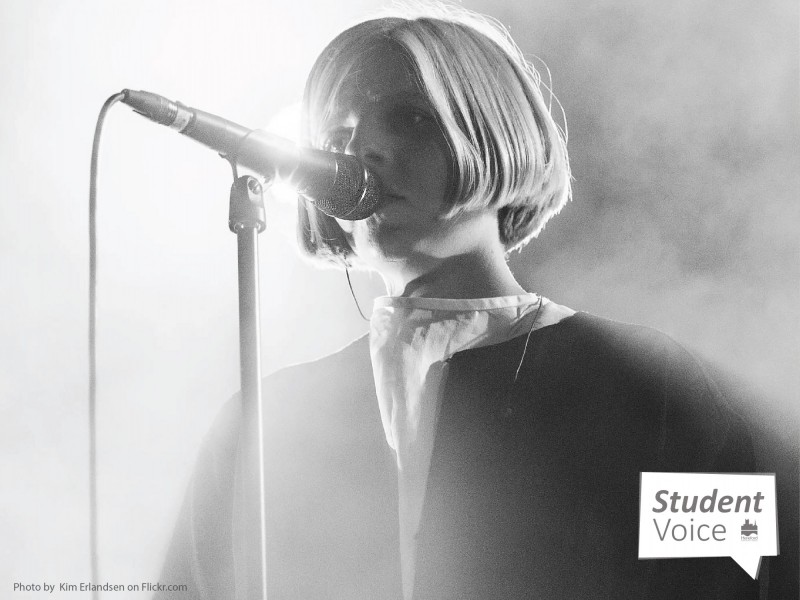 With her third album, The Gods We Can Touch, Norwegian singer-songwriter Aurora escapes her comfort zone, exploring new styles and embracing mythological themes.

The record opens with a prime example of Aurora's characteristic vocal harmonies accompanied by solitary notes high on the piano. The 1st real song, Everything Matters, evokes long drives through the countryside. Whilst undeniably romantic, its underlying message is almost philosophical. Rather than being intimidated by the universe’s extraordinary size, Aurora argues love and our connection with nature mean, “everything matters”. Her breathy head voice dances through long decorative melodies, held afloat by the steady rhythm of the acoustic guitar. An otherworldly atmosphere emerges from the track’s electric drums and unusual vocal effects. Its final verse is sung by French singer, Pomme, accompanied by delicate piano.

The second track contrasts starkly with the first. A future festival anthem, Giving In to the Love’s hammering bassline and huge choruses prove as exciting as Everything Matters was soothing. Reverberating guitar, yells of freedom and chiming bells accentuate this track’s raucous atmosphere, which culminates in an exhilarating wordless outro.

Cure for Me demonstrates Aurora's experimentation with new genres. Its groovy synths are a world away from her typical dreamy style. A huge crescendo leads to a danceable chorus about staying true to yourself.

Echoing percussion and the sound of a 1960s-style organ introduce You Keep Me Crawling. The song is full of surprises, from the unexpected major chord at the end of each phrase to the spiky string countermelodies in the chorus. The swooping melodies and repeated lyrics of the chorus evoke desperate pleading, contrasting with its final soft spread chords.

Exist for Love continues the record’s old-timey feel. Aurora chose this song to be the album’s first single, illustrating the new directions she is taking as an artist. Its sentimentality recreates the sound of the 1920s. Aurora’s soft head voice, sighs and lush string countermelodies somehow manage not to be cheesy. The whispered “I love you”, which concludes the song, carries genuine emotion.

With its warm, echoing synths, beautiful, arpeggiated melodies and finger-style guitar, Heathens is one of the record’s stand-out tracks. Its lyrics continue the religious and mythological themes running throughout the album. Verse two sees the addition of faster percussion and brassy synthesisers, contrasting massively with the song’s quiet bridge in 6/8, accompanied by acoustic guitar and echoing backing vocals.

Swelling sound effects and jaunty piano arpeggios characterise The Innocent. The chorus’ lively strings are a sudden shock as the pre-chorus gives nothing away. The song’s constant movement temporarily gives way to an angelic bridge section before airy, bubbling sound effects and samba-like rhythms bring the song to a close.

Exhale, Inhale is ethereal and mysterious. A three-note motif hummed at different pitches is soon backed by synthesisers emulating plucked bass. In the second verse, the synth accompaniment becomes lighter and airier, before mutating into mechanical whirring for the third. The chorus is a simple call and response between two versions of herself: a distant “exhale” and a closer “inhale”. Fingerstyle guitar and string countermelodies provide a warm ending.

A Temporary High is exciting from the very outset. A catchy riff on synthesiser emerges from nothing before dying away. Throughout the verse, snippets of this riff hint at the huge chorus which is to come. A steady rhythm on kick drum, swelling synthesisers and tremolo guitar add to the anticipation. A pulsing bassline crescendoes towards the eventual re-emergence of the riff.

A Dangerous Thing’s repetitive, rocking guitar line keeps its sing-along chorus a secret until it emerges from nothing. Only in Artemis will you hear an accordion solo in modern pop music. Blood in the Wine takes another unusual turn, with tribal-like calls, dramatic strings and persistent drums creating constant drama.

The wistful atmosphere of This Could Be a Dream arises from its echoing acoustic guitar and shimmering synths. The songs slow-moving melody and Aroura’s sigh-like vocals draw you into a daydream. Serenity permeates through its string and saxophone solos. Muffled vocals and string glissandos contribute to a lurching effect in the bridge.

The final track, A Little Place Called the Moon, is wordless until 2:40. Instead of lyrics, echoing guitar and distant “oohs” create a folkish feel, whilst shimmering synths and a steady beat perpetuate the previous song’s dreamy mood. When the lyrics do appear, Aurora’s melody is extremely simple and legato. At one point, her voice is manipulated into a bizarre wind instrument, concluding the album as unusually as it begun.

Photo by Kim Erlandsen on Flickr.com