History on our doorstep 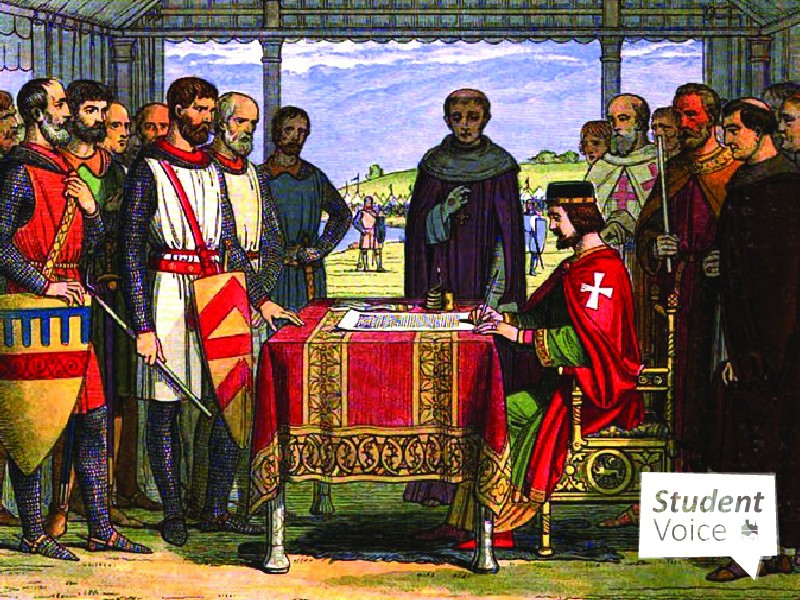 Liberty, justice and equality- are just three of the aspects of our lives’ that the Magna Carta has influenced over 800 years later. Who would have thought that something so long ago would impact lives in the 21st century and provide the framework for arguably some of the most significant acts in history? Furthermore, Hereford Cathedral is fortunate enough to be the home of the finest copy of only four copies still in existence.

The Great Charter of Liberties or ‘Magna Carta’ is one of the most famous documents in history and was agreed by King John and his barons at Runnymede near Windsor in 1215. To fully understand the significance of this we must look at the events leading up to it. King John ruled poorly spending a lot of money on crusades and wars and in turn increasing taxation dramatically. The powerful barons of the time became disillusioned in him and threatened revolt; through military action they seized control of London. Moreover, this forced King John to meet them and restore peace through the Magna Carta, which confirmed liberty and privileges of the King’s subjects and to an extent reduced the king’s sovereignty. Later in 1225 King John’s son King Henry III reissued the Magna Carta and it is one of these exemplars of the 1217 Magna Carta that Hereford Cathedral possesses- this is extremely similar to the original and overtime became a part of written English law. Arguably, despite the symbolism of the Magna Carta, it had limited effect in the 13th century as the majority of the population was not free. Furthermore, it is the way the Magna Carta has been interpreted and gone on to influence other works, such as declarations regarding freedom and justice, that makes it so significant.

The Magna Carta may have been agreed by King John and his barons in 1215, but its impact lived on and was fundamental multiple times in history. This is evident through the influence the document had in the 18th century on the American Declaration of Independence and the Bill of Rights; the Magna Carta added to revolutionary thinking at the time through its promises of liberty and encapsulated how Americans felt about British oppression. This highlights just how impressive the international influence of the Magna Carta has been and the way it is still relevant and has added to these declarations and monumental steps forward for mankind. Another of these is the more recent Universal Declaration of Human Rights by the United Nations in 1948 which draws on principles of equality and individual freedom as first established in the Magna Carta. Thus, it is clear to see the inspirational power of the Magna Carta throughout history and how it has been integral in helping society blossom as a whole.

Just the journey of Hereford’s copy of the Magna Carta is remarkable in itself, from surviving eight centuries and being hidden in a secret location in Aberystwyth during World War 2 to currently travelling the world. In 2015 the Magna Carta took an incredible world tour visiting seven countries and four continents, enabling it to be seen by thousands and hopefully inspire the next generation to recognise and keep improving equality across the globe. Right now the Magna Carta is still away on only its fifth holiday out of the city of Hereford, but I am sure it will be back soon and when it is why not take a stroll down to the Cathedral and visit the document which has had an international impact throughout history and is right on our doorstep?