A Flicker of Humanity 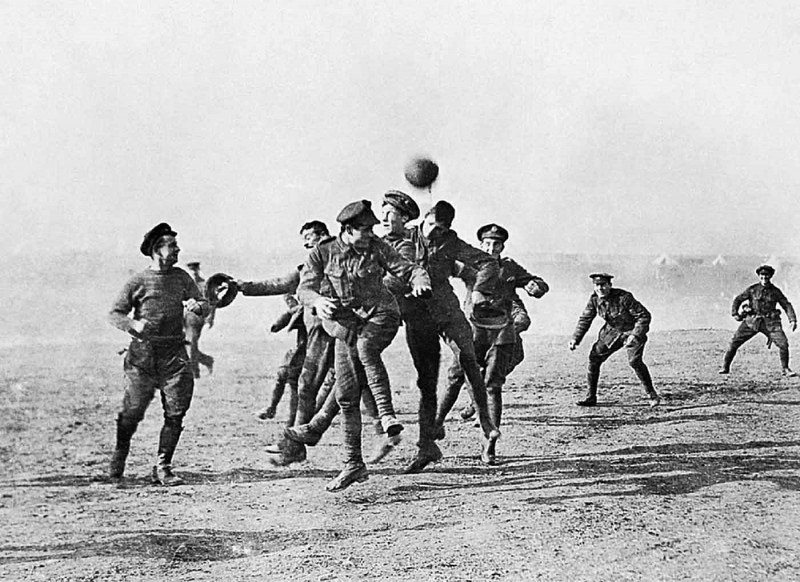 “We were laughing and chatting to men whom only a few hours before we were trying to kill.”

It was 105 years ago when a bloody conflict enwrapped our world like a blanket stitched in barbed wire and screaming souls – The First World War. Millions of people sacrificed their lives and suffered intensely in conditions that we today find difficult to understand; it was all in the name of a political chaos. It is hard to recognise any morality in this torturous battle, any flicker of humanity in the earth’s leaking candle. Yet, the flame did not become extinguished in 1914, for Christmas comforted those who endured the horrors of the Western Front through the presence of a football.

The 24th of December united a division alongside the British (Tommy) and German (Jerry) lines. Yuletide fraternisation would “destroy the offensive spirit in all ranks”, according to the British High command, so to Tommy’s dismay, the festivities of the German line seemed like a world dream away. Imported Christmas trees, lanterns taunting British snipers and the ‘harmonious’ unity of ‘Stille Nacht’ echoed across no-man’s land in a wave of festivity from the Jerry trenches. Despite the watchful eyes of officers, the perplexed Tommies joined in, and the Germans gleefully ended the chorus by saying (in English) – “Tomorrow is Christmas; if you don’t fight, we won’t.”

Unlike most days in the trenches where sleeping frames had been woken up by artillery bombardments, the morning was a silent and peaceful lull. By midday, German soldiers were standing upon their parapets, unarmed and in full view of the British snipers, yet Captain Stockwell (British Commander) attempted to assert control by shouting his wish for a ‘chat’ with his German counterpart.The Jerries complied. They met halfway across the barren wasteland, and within a couple of minutes, the a truce was agreed. All along the line, Christmas Day was shaped by the willingness to disobey orders.

Men shook hands, fraternised and formed short-lasting friendships, engaging in German jovialities. Before long, a football was cascaded out of the German trenches, and it was reported that the game started almost immediately. It wasn’t a game of halves, oh no – more like 70:50 (G:B). As a result, Jerry won the match 3-2, most probably, amongst the lighted atmosphere of friendship and comradeship.

But all good things must come to an end.

The following day, the guns rumbled once more.