Tom started out with a passion for sports photography and whilst studying at the College took up the role of official College sports team photographer and writer – his reports and pictures were regularly published in The Hereford Times and his coverage of Bromyard FC matches were also printed in the local magazine Off The Record.

Other opportunities soon came Tom’s way including photographing the England Rounders squad including one international fixture and covering the Malvern Junior Open which featured some of the best junior tennis players in the country.

During the summer of 2009 and going in a slightly different direction, Tom achieved major success when he was awarded the title of Royal Horticultural Society Young Photographer of the Year.

That summer also presented a time of reflection for Tom as he worked on improving his photography. It was during this period he came up with a unique project and style – Silhouette Sport, an innovative approach to the exercise of sports photography. This was adopted by University Birmingham Sport.

Within the first three weeks at the University of Birmingham reading History (War Studies), Tom became the Chief Photographer of the weekly student newspaper and was given a photography internship by University Birmingham Sport.

Over the course of that first term, Tom’s portfolio expanded as he perfectly captured the raw action and energy that university sport presented. His images were used for merchandise and advertising and are a permanent feature in the Munrow Sports Centre at the University.

Part of Tom’s intern programme was to develop his photography as an official photographer at professional events so he signed up with agencies AMA Sports Photo Agency and Action Plus Sports and was fortunate to be mentored by Bob Martin at the Wimbledon Tennis Championships and Matthew Aston at Premier League football matches.

After graduating, Tom joined the ranks of press photographers at the South West News Service (SWNS) – one of the largest press agencies in the country allowing him to work on major stories every day for national newspapers.

Armed with a huge amount of experience and success under his belt, Tom took a leap into the world of freelance photography.

In 2018, Tom is still enjoying his role at Manchester City in their title winning year and he and Club Photographer, Victoria Haydn, will holding an exhibition at the National Football Museum from 11th-14th May 2018. 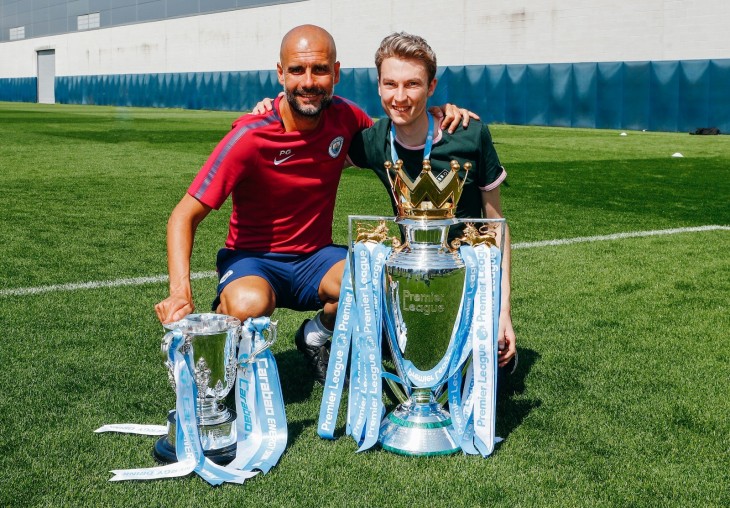 Tom with Pep Guardiola and the Premier League trophy

For more information about Tom and his work you can read his blog or view his website.