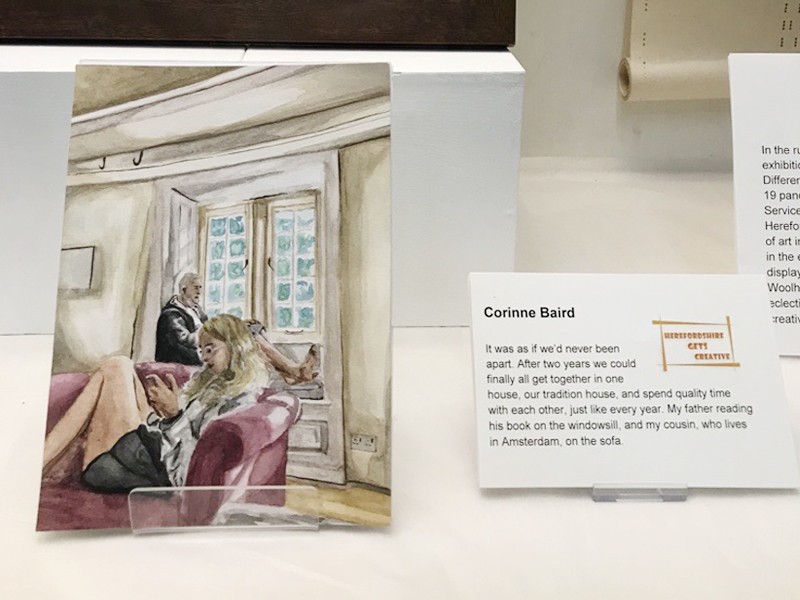 Corinne Baird's artwork on display at the exhibition

Two Hereford Sixth Form College students, Abi Rafferty and Corinne Baird, have been selected to have their artwork displayed at Grayson Perry’s ‘Vanity of Small Differences’ exhibition at the Hereford Museum and Art Gallery.

The ‘Vanity of Small Differences’ exhibition includes six tapestries inspired by Williams Hogarth’s ‘A Rake’s Progress’ and tells the story of class mobility and the influence of social class on aesthetics, the process was documented in the Channel 4 television series ‘In the Best Possible Taste with Grayson Perry’. Local artwork will also feature as part of the wider exhibition.

Abi Rafferty is a second year student (former Gwernyfed High School student) who studies A Level Art, Further Mathematics, and Physics. Her piece, titled ‘Woman’s World?’ is a collage that looks at the representation of women. She explains her artwork as the following:

“This collage is a parody of the representation of women, specifically across different social and economic classes.  I wanted to include famous female figures; caricatures of the ‘ideal’ beauty standard; and women fighting against oppression. I also tried to portray some of the pressures placed on women - regardless of class - to depict a sense of unity.”

Corinne Baird is a second year student (former John Masefield High School student) who studies A Level Art, German, and Mathematics. Her artwork is a painting depicting a domestic scene. She describes it as the following:

“It was as if we’d never been apart. After two years we could finally all get together in one house, our traditional house, and spend quality time with each other, just like every year. My father reading his book on the windowsill, and my cousin, who lives in Amsterdam, on the sofa.”

This is an outstanding achievement for two incredibly talented students, congratulations Abi and Corinne!