Science, Religion and God ~ A Lecture by Professor Keith Ward 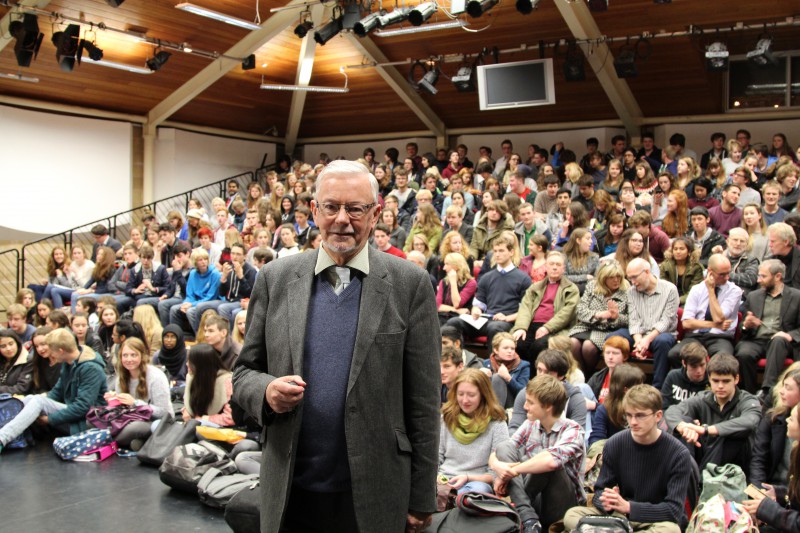 Professor Keith Ward, a distinguished philosopher who has taught at Oxford, Cambridge, London, Edinburgh and Glasgow universities, as well as in the US and Canada, spoke to a packed audience at the College.

He began by explaining how classical physics has ‘been turned upside down’ by quantum physics. No longer can we think of a deterministic Newtonian universe, a clockwork universe, in which everything is predictable. Referring to the works of Brian Cox and Stephen Hawking, Professor Ward outlined three key areas whereby our view of reality has been revolutionised by quantum physics, and the results are mind-bending.

Firstly, quantum indeterminacy has shown that the universe is not predictable as we once thought. Indeed, at the subatomic level, the laws of nature are seemingly unpredictable – probabilistic, not deterministic - or, as Brian Cox puts it, “everything that can happen does happen”.

Secondly, the world, the universe, is not simply made up of matter but of waves and particles. Light waves sometimes travel as quanta particles and sometimes as waves and what we see is not actually what there is. For example the Delayed Choice Experiment shows how waves become matter when it is observed – indeed matter only becomes matter when it is observed. Such a scientific insight has profound ramifications for our understanding of ourselves and the world around us and challenges the materialist mind-set which maintains that consciousness is merely a spin-off of matter. As Stephen Hawking says: “We create history by observation, history does not create us” and “observation  you make in the present affects the past”. Ward suggests that in future, quantum physics will have to pay more attention to consciousness: “With quantum physics we can no longer ignore the mind. The universe is much stranger than we think”.

Thirdly, Professor Ward spoke of quantum entanglement, which is the idea that everything in the universe is entangled with everything else; despite distances between them. This counters what Newton once said: “Nobody but an idiot could believe in action at a distance”. What happens to one subatomic particle will bring a corresponding change in other particles. Even if a new particle happened to come into existence some 40 billion light years away it would have some effect on the world today, as the Bell Theorem states. This means that what happens on the other side of the universe affects us in some way.

There was a hefty undertone of theology in what Professor Ward was saying, most notably when talking about the Big Bang Theory and the origins of the known universe. As Ward discussed, waves only become matter (physical substance) when observed, and so, in order for the universe to have been physical from the beginning then some sort of consciousness must have originally witnessed it; for Ward, like many others, this is a superhuman and great intelligence: God. For other quantum physicists, and quantum cosmologists (such as Stephen Hawking), instead there is a multitude of ideas; Hawking himself stating in his book The Grand Design that it is our observation of the past that causes the universe to exist now, in the present.

If anything like last year, Professor Ward’s lecture will provoke much thought and discussion in the weeks and months to come, reminding us of Einstein’s words that the most incomprehensible thing about the world is that it is comprehensible.