Former students and nominated persons who were expecting to collect exam certificates from Hereford Sixth Form College will no longer be able to do so due to lockdown restrictions. We will arrange a time in the future for collection of the exam certificates.
Skip navigation 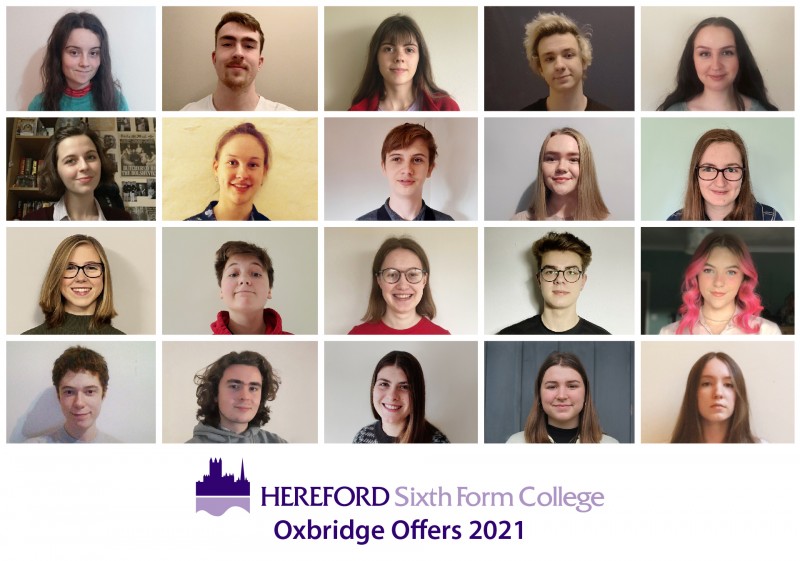 Hereford Sixth Form College students have once again had incredible success with Oxbridge applications; demonstrating how the students have adapted excellently to this new learning environment. Twenty-two students, 38% of those who applied, have gained offers to study at Oxford and Cambridge Universities. This compares with the national average of fewer than 20% who apply and receive offers. This places our local sixth form amongst the most successful in the country, for either state or independent schools. For a small rural county this is a phenomenal achievement.

STEM subjects continue to be hugely successful. From Cambridge, three students have been offered places in Natural Sciences, two for Computer Science. From Oxford, two have received offers for Biochemistry, another for Biology, and for the first time a student has received an offer for Economics and Management. The aspiring medics have been successful once again, but this year is a record with three offers for Medicine at Oxbridge! Many others have had offers for incredibly competitive places in subjects such as English, History, Linguistics, PPE and Law. This breadth of subjects demonstrates the depth of academic rigour across the subjects, and the diversity of the interests in their gifted and talented cohort.

Krystian Bialoskorski, former Queen Elizabeth School student, has received an offer to study Economics at the University of Cambridge. Krystian is thrilled with his offer; “I still cannot believe that I will be studying at the University of Cambridge. I am very proud of myself; the work which I have already put into studying and application process…I feel very privileged to be in 20% of people who got offers every year and I cannot wait to explore my passion for economics further.”

“Studying at the Hereford Sixth Form College opened my horizons on how broad academic subjects are. While studying A Level Economics I can explore different areas of economics and be challenged by different economic thinking due to many articles and other sources available for students…At Hereford Sixth Form students work hard but hard work pays off. Also, without a wonderful careers team and economics department my application would not be strong enough, they are doing an amazing job.”

Students who are considering applying for Oxbridge and the Russell Group have access to the College’s flagship programme Reach, which creates a community of the most able. These weekly lessons support 300 of the most academic students with excellent teaching and guidance to prepare them for the rigours of applications to higher education. With this bespoke support, Hereford Sixth Form College students are able to maximise their potential and pilot their own futures, whether it is towards entry to highly competitive universities or degree apprenticeships, which are also increasingly popular amongst the brightest students.

Hereford Sixth Form College is also the regional hub for Cambridge’s HE+ programme, working with partner state schools in Herefordshire and beyond, providing masterclass sessions to stimulate academic interest beyond A Level study.

Emma Catterall, a former Aylestone School student, finished her studies at Hereford Sixth Form College last year and applied during her gap year; she has received an offer to study Law at the University of Oxford. “The support in my application was really amazing. I'm not even a HSFC student anymore and so they really didn't have to provide the support they did, but I had multiple phone calls or Teams meetings about my personal statement and the interview. I always knew I was going to go to university but I never thought I could go to Oxford before coming to Hereford Sixth Form College.”

Vicky Orsmond, creator of the Reach programme, says, “Reach is designed to encourage our brightest and best to fulfil their potential. It is so fantastic that, even with the effects of the pandemic, by consistently supporting them with the live delivery of Reach lessons and the development of a dedicated YouTube channel, ‘Reach HSFC’, our students continued to show their brilliance in the admissions tests, and in online university interviews of December. I am so proud of them all; they are amazing.”

Hereford Sixth Form College students excelled in their admissions tests and challenging interviews, showing the academic curiosity and independent learning skills so valued by these universities. The College’s close links with Christ’s College, Cambridge, and Oriel College, Oxford, provide regular support for students. Students also able to apply for learning opportunities only open to the maintained sector, such as UNIQ, Villiers Park, and the Sutton Trust summer schools. With access to bespoke personal statement lessons, practice interviews with our specialists, and application support, students feel more confident in their ability.

Peter Cooper, Principal of Hereford Sixth Form College, is extremely proud of the students’ record-breaking success; “I want to congratulate all the students, the wonderful staff who teach them and our brilliant Reach team for their fantastic efforts. It gives me great pride that Hereford and its surrounding areas punch so far above their weight at a national level. Most public schools will be envious of what our College community has achieved”.

The following students have been offered places at the University of Cambridge: 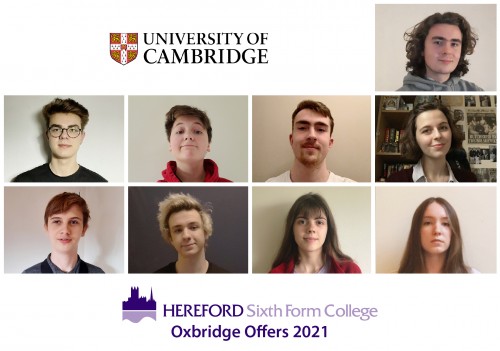 Students who have received offers from Cambridge

The following students have been offered places at the University of Oxford: 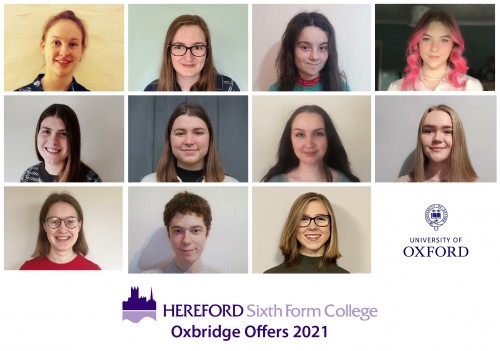 Students who have received offers from Oxford