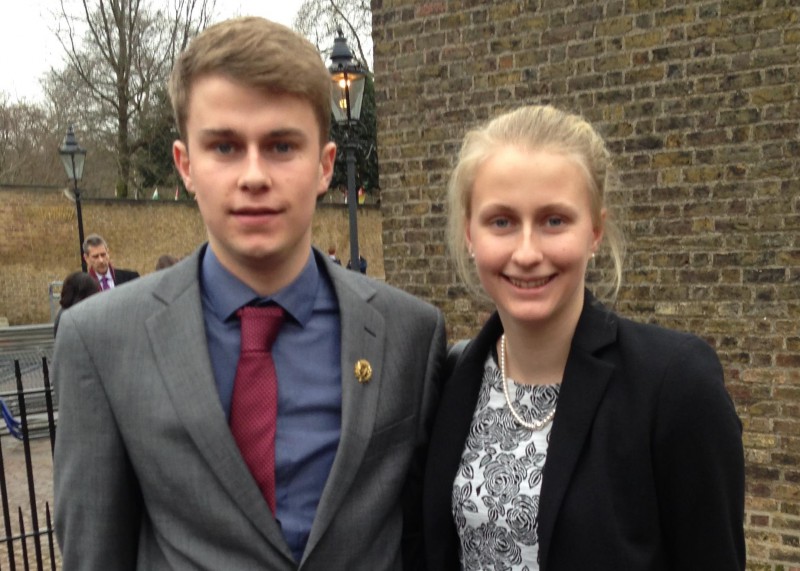 Marcus was accompanied to the DofE Awards Ceremony by sister Belinda

Marcus Betts a former student of Hereford Sixth Form College accompanied by his sister Belinda; was presented with the Gold Duke of Edinburgh’s Award at St James’s Palace, on Thursday 26th February 2015.

The Ceremony took place in the Picture Gallery at the Palace and Marcus received his Award from Olympic Silver Medallist, Phil Brown, in the presence of The Patron HRH The Duke of Edinburgh.

To achieve the Award Marcus worked committedly on five sections of the DofE programme over an 18 month period. The diverse activities ranged from coaching hockey to working on a National Trust restoration project at Colby Woodland Garden in Pembrokeshire; where he learnt many new skills such as pointing, fencing and path building.

The highlight, and greatest task of the Award was his expedition in the remote Brecon Beacons, over four days and three nights – this was a test of initiative, leadership, teamwork and endurance skills.

Whilst on the expedition Marcus and his group battled against extremely high temperatures, low cloud and challenging terrain in search of the WW2 aircraft crash sites; this they achieved.

The experience of the DofE scheme from Bronze through to Gold has given Marcus skills for life. It’s built self-confidence and allowed him to have involvement in the local and wider community through sports and his work with the National Trust.

Marcus is now doing a BSc in Geography at Keele University and will be studying part of his course at the University of Bergen, Norway later in the year.

Find out more about the Duke of Edinburgh's Award here