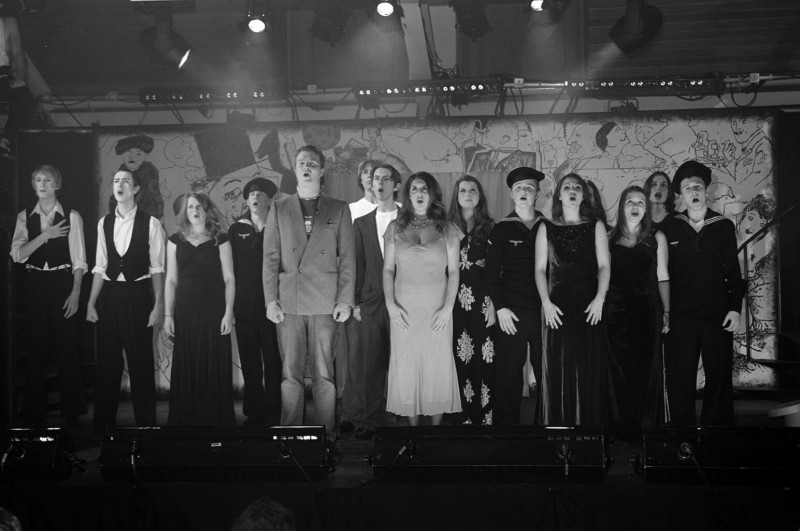 The cast of the College's 2004 production of Cabaret singing 'Tomorrow Belongs to Me' (Greg Tannahill, front row, left of centre)

It’s always good to hear what our ex students are getting up to and you may have seen our next alumnus on the TV over the Christmas period.

Greg Tannahill studied with us from 2003-2005 taking A Levels in Communication Studies, Drama & Theatre Studies and Theology. Whilst here, he took part in one of the College’s most memorable theatrical productions, Cabaret, playing the part of Ernst Ludwig.

Greg joined the Year Out Drama course, based in Stratford-upon-Avon in 2008 and then trained for three years at the London Academy of Music and Dramatic Art (LAMDA).

Since then, Greg’s acting career has flourished. He was part of the original cast of Mischief Theatre’s The Play That Goes Wrong, an award winning West End comedy. An excerpt from the play featured on the Royal Variety Performance in 2015 which also featured cameos from Kylie Minogue, Josh Groban and Jack Whitehall.

So where might you have seen Greg over Christmas? Mischief Theatre’s second play Peter Pan Goes Wrong, featured on BBC1 on New Year’s Eve. If you missed it, you can catch it on the BBC iPlayer until 31st January.

Greg is now playing in Mischief Theatre’s third, award nominated, farce, The Comedy About a Bank Robbery, at the Criterion Theatre. Catch it if you can.