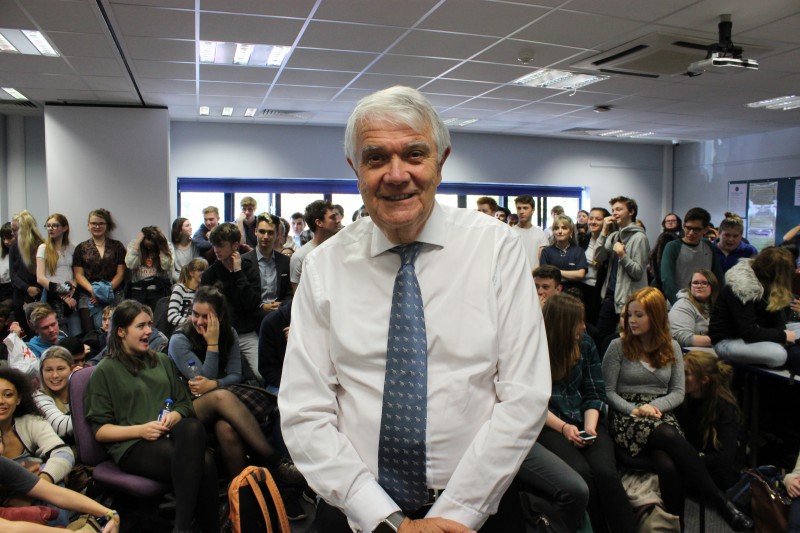 Lord Burns about to take the floor

Hereford Sixth Form College continues its established tradition of building close links with the wider world, with a visit from one of its most prestigious guests to date. Lord Terence Burns whose distinguished career included former Chair of Santander,  Chief Economic Advisor to the Treasury and Chairman of the National Lottery Commission (to name a few!), came to deliver a talk on the most important decision the UK has made in recent history. The entire top floor of the Risbury building was packed with nearly 300 students in anticipation of  ‘BREXIT: What are the consequences for the UK?’

The guest speaker did not disappoint. Describing himself as a "risk averse economist”, Lord Burns outlined the history of how and why it was decided to hold a referendum and provided an overview of the arguments on either sides of this controversial debate. Students were particularly captivated by the anecdotal descriptions of economic decision making with previous Lord Chancellor (now Lord) Lawson and Margaret Thatcher. The talk was followed by a lengthy question and answer session where an impressive range of questions was posed to the guest on economics and political sovereignty. These included the effectiveness of quantitative easing as fiscal policy; the likelihood of retaining existing Japanese business investment in the UK; whether banking would relocate to other EU nations and the opening up of new markets.

Enrichment Co-ordinator, Marco Martinelli, commented, "We are privileged that such a distinguished guest would devote time to our students. To receive an insight from the highest levels of government and economic management is truly special. Students were fascinated and we have already requested that he return next year. Our strategy is to bring important figures and expertise in the wider community to our students providing understanding and also inspiration for what they can achieve."