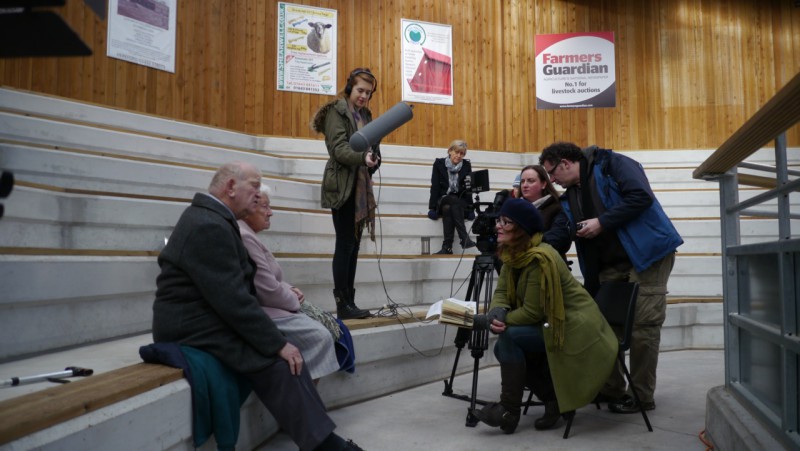 Three Film Studies students were an integral part of a film which was a huge hit with audiences at Borderlines Film Festival 2014.

The entertaining and warm-hearted film, Chewing The Cud, was produced locally by Hereford-based Catcher Media Social with a group of talented trainees, including Hereford Sixth Form College students Abbey Kaye, Bethany Fitter and Liam Rushton and was voted an audience favourite at this year’s Borderlines Film Festival, beating Oscar-winner Twelve Years a Slave and perennial favourites like Cinema Paradiso.

It was also featured on Midlands Today and Radio 4, and is still receiving local press coverage as it tours the area at local screenings.

With anecdotes galore, Chewing the Cud portrays the showmanship and characters that gave the market its vibrancy and unique heritage. The film revisited the past in interviews with farmers, auctioneers, townspeople, breeders and traders.

One of the ways in which the project was unique, however, was the key role of the trainees - who filmed, researched, edited, and interviewed alongside the professional members of the team.

Catcher Media’s Rick Goldsmith, creative director of Chewing the Cud, said “the trainees were very much a part of the team, learning on the job – and they were brilliant to work with!”

2014 leavers, Bethany Fitter and Abbey Kaye, both found that university interview panels were very keen to talk about their experiences on the project. Both students will be starting film studies degree courses at Bristol in the autumn and felt that working on Chewing the Cud had helped secure their places.

First-year student, Liam Rushton, enjoyed not only the film-making but the experience of being involved in the film’s premiere at the 2014 Borderlines Film Festival; he wrote in a blog post:

After many months of being involved in this project, it was fantastic to see the finished film. As a film student there is something incredibly satisfying about watching a film you helped shape and create.”

Jo Henshaw, Chewing The Cud’s project manager, summed up the success of the venture saying “I think the project benefited as much from having the involvement of Liam, Abbey, Bethany and the other trainees, as the trainees benefited from being involved in the project!”

To find out more about the film click the following link: http://chewingthecud.net/