The question of whether [UKIP is] merely 'a protest vote' is questionable...[it is] here to stay for the forseeable future, and cannot really be seen [anymore] as merely a party made up of angry old men 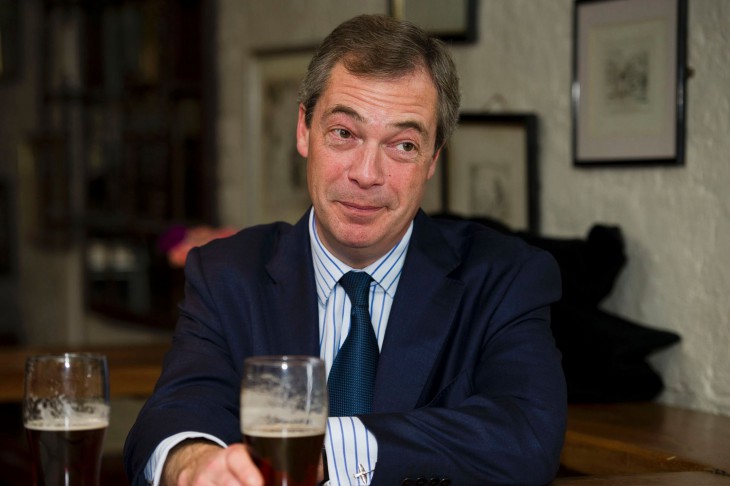 "A bunch of fruitcakes, loonies and closet racists", as our PM said in 2006, seems quite a damning summary of UKIP by today's standard. Indeed, now, branding the party with such a title would only make it more popular and more a symbol of anti-elitist, new-age, populist, protest politics and its potential supporters more encouraged to vote for them.

However, the question of whether it is merely “a protest vote” is questionable. Given its electoral results in recent years it will surely be a significant player in our British system for the foreseeable future. UKIP has taken on board “populist” discontent by adopting policies that are not related to the European Union by appealing to resentment of a perceived “metropolitan elite” it is still very much a party that is centred on the prospect of our place outside of the EU. It is very much dominated by one man; their charismatic leader Nigel Farage.

Let us just for once, disprove the idea that UKIP is but a mere protest vote - what do we need to look at? Firstly, the reasons why they have become so incredibly popular, at least from what we see through the media. The feeling of alienation of a substantial part of the British electorate have from politics. There are obvious reasons for this; a contempt for the Westminster elite exacerbated by the expenses scandal which undoubtedly has left many to see politicians as merely in the job for themselves. Yet, there are some deeper and more interesting possibilities. One is that the 'Old Labour' voter is alienated from the current Labour administration, and has potentially been so since the creation of 'New Labour' in 1997.

With the Labour party in its current form, the once embraced concept of democratic socialism seems now a distant memory. It has embraced free markets, accepted that it is not such a terrible thing to be rich, and attempted to distance itself somewhat from a party of its roots - that is mainly the trade unions. In order to appeal to a broader audience, the Labour Party has moved towards the political centre.

It seems odd that some of the grass roots left-wing of the Labour Party is now moving to a party that espouses soft libertarian views. Such a move is reluctantly seen from Labour and Conservatives who, one may argue, are more politically central than UKIP.

Although the shift of Labour votes to UKIP is not quite as stark as that from the Tories, it nevertheless has been recognised by UKIP, to the extent that they've scrapped some of their longstanding policies. This includes their proposed flat rate tax system.

So exactly why are Labour and ex-Labour supporters moving to UKIP? The most credible argument is that Old Labour supporters are more socially conservative than their New Labour counterparts. For example, they're more concerned about immigration. Why? Because they are most likely to have seen their community's make-up change so much over decades. For UKIP, being mainly a party that wishes to deal with the problem of “open-door immigration”; voters who too want to see it dealt with are inevitably disaffected with the perception of Labour as having a far more open immigration policy is a perfect opportunity to grab more voters.

With regard to the Tories, there is a much wider possibility for voter defection. Ultimately the majority are likely to be concerned with immigration, (and David Cameron has been making noises about tackling this issue), ultimately nothing can be done about immigration from within the EU, whilst Britain remains a member. So again, a gain for UKIP here.

Another possibility is that, like Labour defectors, they have seen their party move towards the centre ground. Unlike in the days of Thatcher and Major, when the state was on a course of being 'rolled back'; when the most important thing to do was to help one's family first, and (certainly under Thatcher) a clear stance against a politically-motivated European Union existed, there has been a shift through the present PM, Cameron. We have seen an emphasis upon green energy, the existence and need of a 'Big Society', a foreign aid budget that's been ring-fenced, and the legalisation of homosexual marriage. So again, UKIP's policies, which are aimed at those who do not agree with the way that the Tories are now heading, have a way of gaining further support.

Finally, we need to look at statistics, to see if UKIP is truly here as a significant force. Firstly, it is very true that all political parties should be worried by UKIP's seemingly long-term presence. Polls show that even though the bulk of their voters used to be Tory (45 per cent), Labour will undoubtedly be effected in 2015, with 11% loss in support so far, and more predicted. Surprisingly, the Lib-Dems may in fact take more electoral punishment than Labour, with polls showing a possible 15% shift of their votes to UKIP, despite the Liberals being almost polarised from them, in terms of policy!

Having said all this, there is a lot standing in UKIP's way from being successful next year. First and foremost, the First-Past-The-Post system ultimately favours the larger parties. At a general election, UKIP will therefore probably only gain half a dozen seats or so, and therefore will not be able to influence the government of the day as much as they'd like to.

In short, UKIP is here to stay for the foreseeable future, and cannot really be seen as merely a party made up of angry old men disaffected with the social democrat route and those that want a 1980s Tory Party. UKIP has and is expanding out across the country, taking votes from all three British political parties.

In order for the three main parties to win back their traditional support, they will require tempting policies and will need stop trying to move towards the supposedly 'safe' centre-ground.