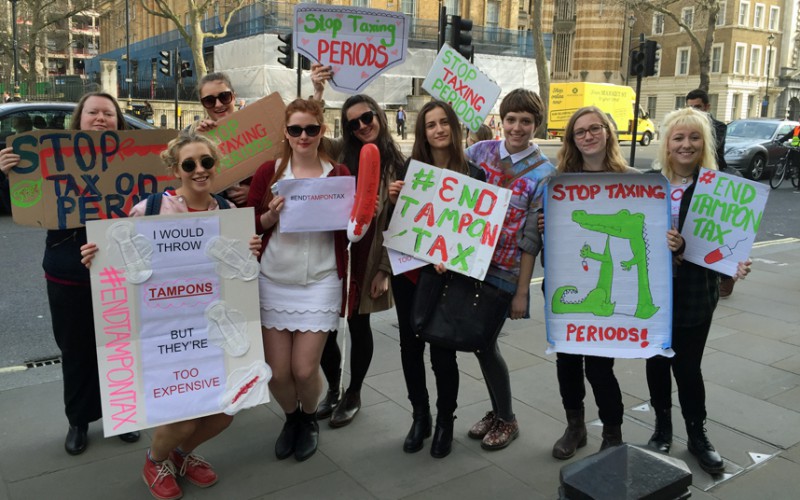 As if women do not have enough troubles on their hands with the wage gap, constant objectification in the media and pressure to conform to society’s ideas of beauty; the issue of the Tampon Tax has returned. It does truly astound me that in the 21st Century, women are actually taxed for what is an entirely natural occurrence in every woman’s life.

Currently all sanitary products are taxed at 5% VAT which is the lowest allowed under EU law because they are considered a “luxury” item.  But the aim of George Osbourne is to increase this. The idea of increasing the tampon tax is just horrific. Why? Because it is an utterly ridiculous concept that women have to pay for tampons at all, let alone pay tax on them. It is easy for the male MPs to sit back and claim they are a luxury item when they don’t bleed out of their genitals for a whole week.

The fact that MPs still cringe and squirm at words like “period” and “tampon” like 13 year old boys in a PSD lesson does make me worried for the future of this country and reflects the disproportionate representation of women in our parliament. As if the mood swings, cramps and the constant hunger for chocolate weren’t bad enough for women, now they have to pay even more to feel comfortable during an incredibly sensitive time.

Sanitary products are far from a luxury but instead a necessity.  There are products on the market that are not considered luxury items such as crocodile meat, helicopters and razors. It’s very easy for George Osbourne, the power hungry robot/vampire crossover sent to suck all the money from the poor, to sit there and talk about raising the tampon tax when he is not one of the people that are affected by it. This is not just a tax; this is a tax for women and women alone.

SNP MP Alison Thewliss commented: "It is absurd that while men's razors, children's nappies and even products like Jaffa Cakes, exotic meats and edible cake decorations are free from VAT, women are still having to pay additional costs on what is already an expensive yet vital product."

Regardless of your gender, political bias, background and class you can agree that taxing almost half the population for ovulating is a ridiculous concept in itself; let alone increasing it to make what should be available to all women, a luxury for those who can afford it. A period is not a luxury; it is a fact of life that cannot be prevented. Why is it that the vote on the tampon tax is left to a parliament full of people who will mostly never experience it? Why should women not have their opinions heard on this issue? We are essentially being taxed for having vaginas.