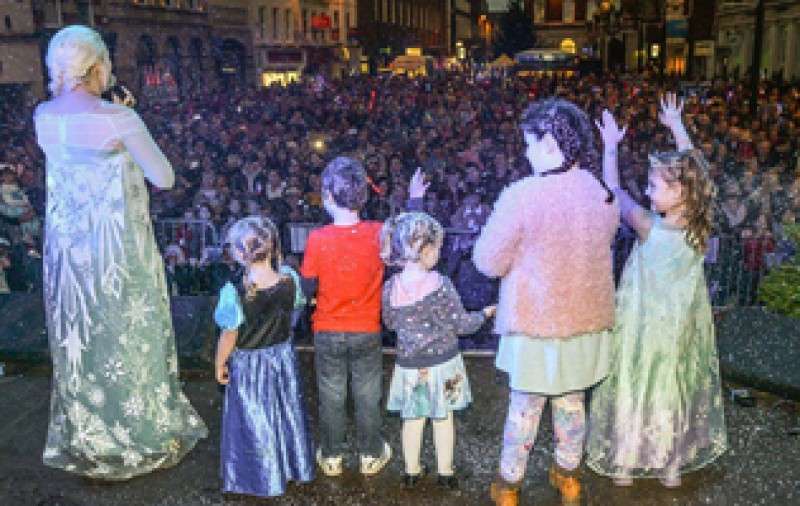 Photo: Jules Annan ~ The competition winners singing Let It Goin front of hundreds just before the big switch on

We all know that it really is the start of the festive season when it gets to the annual Hereford Christmas Light Switch on. This year’s switch on was organised by Sunshine Radio and had lots going on. With entertainment from the early afternoon all the way through to the evening, hundreds of people braved the cold weather to witness the event, making this year a huge success.

The highlight of the event had to be the entertainment with girl band Stooshe headlining as well as performances by 2Faced Dance Company and Sandi Thom and guest appearances from Santa, Dalek Sec and Elsa and Anna.  Local company, Endless Entertainment Events who organised much of the entertainment for the event, even ran a competition in the weeks leading up to the event giving children the opportunity to submit a Christmas themed drawing to have a chance to sing Let It Go on stage with Anna and Elsa (also from Endless Entertainment), a prize any child could only dream of.

The lights were switched on by the city’s mayor, Charles Nicholls,  who later said "It was a fabulous night for Hereford, I can't ever remember seeing so many people in High Town for the switch on.  It was a good event for the city as it really does bring people together in a joyous way.”

The light switch on really was a huge success and had entertainment for all ages, we just have to wait to see what’s in store for next year, but it has been promised that it is only going to get bigger and better…